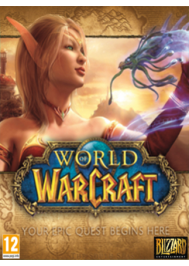 Loyalty discount! If the total amount of your purchases from the seller SOFT-KLUB more than:
If you want to know your discount rate, please provide your email:

You get the key for WORLD OF WARCRAFT: BATTLECHEST ** EUROPEAN ** version.

***** ABOUT THE GAME *****
World of Warcraft is an online global multiplayer game. In this virtual universe, there are thousands of players from all over the world. They fight among themselves or enter into an alliance against monsters. The gray daily routine is left behind: here the place is only hot fights, heroic deeds and exciting adventures.

World of Warcraft is a continuation of the Warcraft game series. This, in fact, is the same world, the same story, the same laws. If you have already played Warcraft, then in World of Warcraft you can see the familiar world through the eyes of a single character. You will become his full inhabitant and will directly participate in his life.